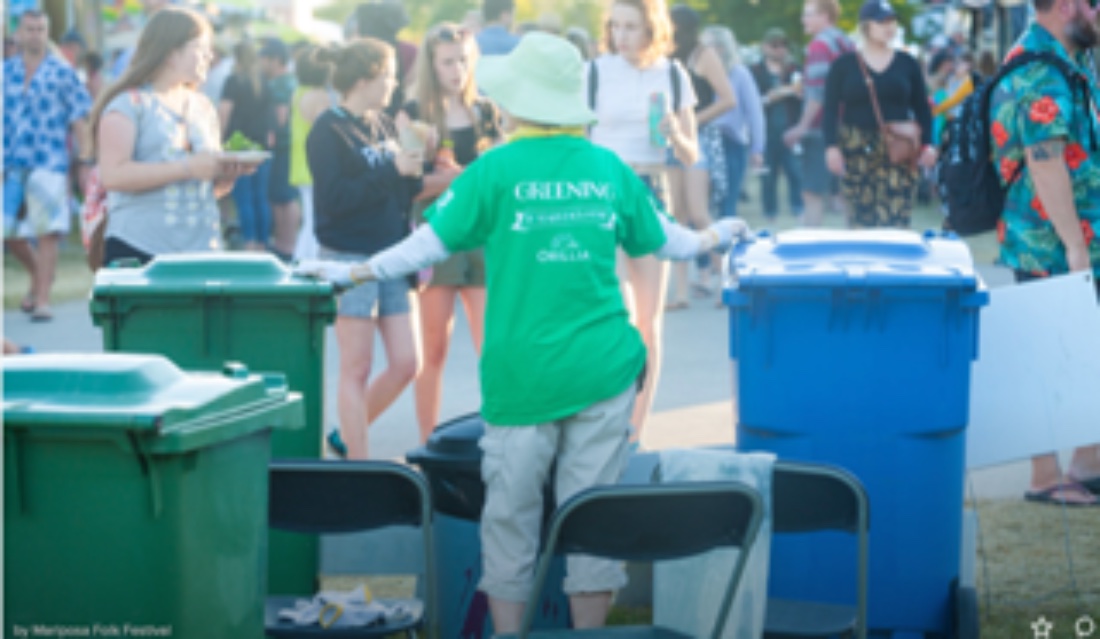 The Greening of the Mariposa Folk Festival

How much does the Mariposa Folk Festival contribute to climate change?  Not as much as it used to, and not as much as one might think. While organizers want participants to feel comfortable, they also want them to leave a much smaller environmental footprint than in past festivals. The Mariposa Folk Festival Greening Initiative began in earnest in 2009 with the formation of a volunteer Green Team. Since then, the Mariposa Green Team has made steady progress reducing waste.

In 2008 17,000 beer cups went to the landfill. Since 2009 that number has been reduced to zero following the introduction of compostable cups. Green Team monitors have been located all weekend long at every waste station throughout the festival grounds to help participants separate their waste into appropriate streams – compost, containers, paper. Putting volunteers at every waste station is a key to Mariposa’s success – helping patrons to make the right environmental choices. 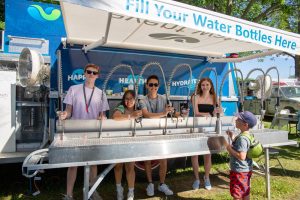 There are no throw-away plastic bottles anymore! Instead, festival-goers bring their own reusable bottles and fill up at the free “hydration stations.” If anyone forgets a water bottle, there are reusable water bottles for sale. Every year, Mariposa Folk Festival eliminates more than 12,000 plastic water bottles from the recycling stream.   A partnership with Event Water Solutions placed the first hydration station at Mariposa in 2009.  The stations continue to be a popular success at Mariposa and Event Water Solutions, a local company, now provides similar solutions to festivals and events around the world.

“Any disposable material brought into the festival has to be compostable,” says Scott Weiler, the Green Team lead. “Our vendors are the front line. Their food containers and utensils all have to be made of compostable material.”

Campers are encouraged to practice “no trace camping” – to take any non-compostable waste with them when they leave. “We know recycling isn’t perfect yet, so we’re turning our attention now to upstream reduction,” says Scott. This means reducing waste—principally packaging—at  its source before it even reaches the festival.

Chris Hazel, the Mariposa Folk Foundation Manager adds, “The Greening initiative is not top-down from the festival organizers.  Rather it is an organic process—supported, demanded and encouraged by patrons, artists, sponsors and partners. Mariposa is always looking for new ways to make a difference. A partnership with Ryerson University has added an educational component to the festival’s Community Village. The Ryerson team, based on their work with Mariposa, even developed a Green Festival Manual which is now used by Festivals and Events Ontario as a resource for other events.”

Festival organizers know sustainability is more than just waste diversion and they are committed to reducing greenhouse gas (GHG) emissions, as well. Does a phone need re-charging? There are cycle-powered phone-charging stations. Don’t want to drive out to Tudhope Park or downtown? There’s a shuttle bus and bicycle compound. There’s even a solar trailer to cleanly power the late-night Hootenanny Stage. Ultimately, Mariposa wants to measure how much energy the festival consumes in total—mainly electricity—and they’re looking for ways to offset the equivalent amount in order to reach a GHG net-zero target.

There are about forty volunteers on the Green Team and, according to Weiler, the people who sign up for Mariposa’s Green Team are highly committed.  Green Team volunteers bring a lot of enthusiasm and pride to their assignments.  Many have been active on the team for years and take pride in reducing the festival’s environmental footprint year after year.

Along the way, the Festival has earned recognition for its green initiatives, including the Tourism Industry of Ontario’s ‘Sustainable Tourism Award” in 2015.  Just a year later, in 2016, the Lake Simcoe Conservation Authority celebrated the Mariposa Folk Festival’s Green Team with their “Pioneering Green Communities Award.”